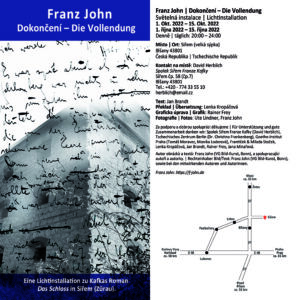 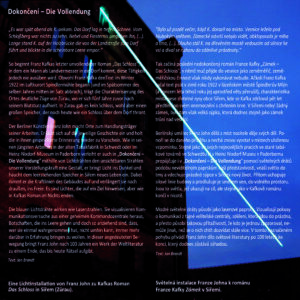 „It was late in the evening when K. arrived. The village was deep in snow. The Castle hill was hidden, veiled in mist and darkness, nor was there even a glimmer of light to show that a castle was there. On the woo­den bridge lea­ding from the main road to the village K. stood for a long time gazing into the illusory empti­ness above him.“

This is how Franz Kafka’s last unfinished novel “The Castle” begins, [in which a man comes to a village as a Land Surveyor, but will never do this activity. Although Franz Kafka began the text in the winter of 1922 in the climatic health resort of Spindler­mühle (and broke off in the middle of the sentence in the late summer of the same year), the characterization of the place bears clear features of Zürau, where he stayed five years ear­lier after his hemor­rhage. There was no castle in Zürau, but there was a large storehouse, which still towers over the village like a castle.

The Berlin artist Franz John makes sites itself to the protagonist of his works. He gets in­vol­ved with the respective history and brings the me­mo­ry stored in back to light. As in his recent works in the old to­bac­co factory in Schwedt or in the Heinz Nixdorf Museum in Pader­born, he also gives shape to the invi­sible rays of our imagi­na­tion with the help of light wires in Dokon­čení – The Comple­tion. He brings light in­to the dark­ness and brea­thes new life into the empty storage buil­ding in Siřem. In do­ing so, he picks up the lines of force of the buil­ding and extends them out­side, into the open.

They are lights that point to a goal, but end up in nothing­ness, as in Kafka’s novel.The blue light wires appear like laser beams. They visualize communi­cation attempts from a secret com­mand center, mes­sages that go nowhere and yet are so attrac­tive that once you have noticed them, you can’t ignore to find out more and more about them. In this indi­cated move­ment, Franz John brings a work of world liter­a­ture to an end after 100 years, which still puzzles to this day.

In the store pre­mises to the right of to­day’s bakery, an il­legal print­shop was operated that produced leaf­lets, posters and pub­li­cations of the “revo­lu­tion­ary move­ment” associ­ated with the student move­ment that radi­calised after 1967. Franz John now makes the his­to­ry of the place com­pre­hen­sible: A con­fi­dential re­port by the political police from April 1967 documents investi­gations at Zwie­städter Straße 10 and ob­ser­vations by some in­spector Böhme. This archival docu­ment, which takes up the entire exhi­bi­tion wall, is ac­com­panied by a listening station. Here you can hear a talk with Ulrich Enzens­­berger, once a foun­ding member of Kom­mune I, who knew the il­legal print­shop and the activ­i­ties of the time well. This con­versation, conducted by Franz John, pro­vides insights and inte­res­ting details about the history of the sight and Berlin con­tem­po­rary history in late 1960s. Text by Martin Steffens

Talk with Ulrich Enzens­berger, Writer, and Franz John on June 25th at 5pm.

einzueins – Kunst in der Kønig­li­chen Back­stube is a project by Kati Gausmann. Viva Maria – Cult film of the ’68 movement by Louis Malle. 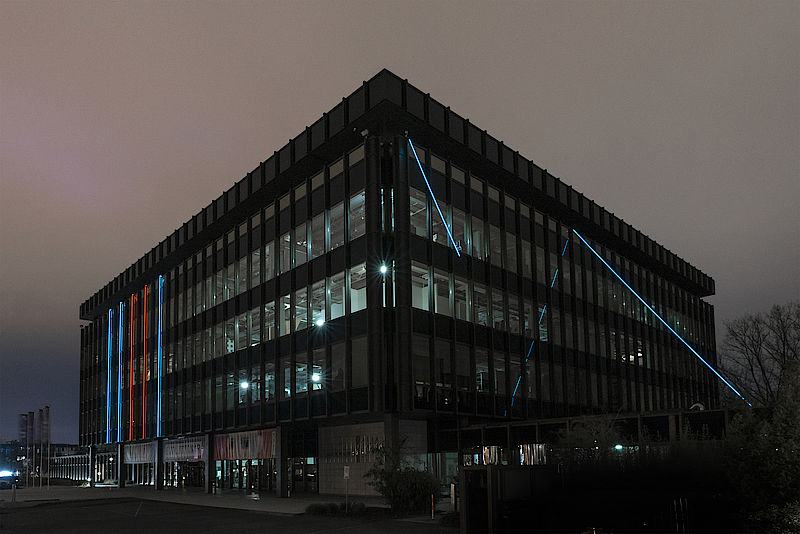 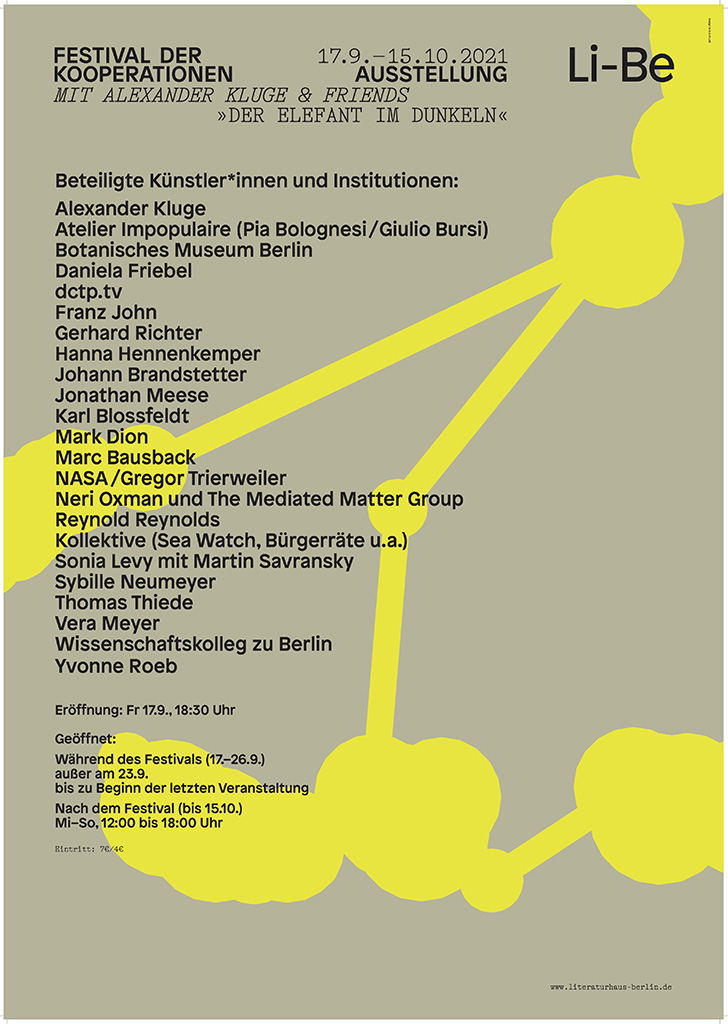 Listening to the hops grow …
.

.
The project is still in development, with a first installation/intervention during the COVID-19 lockdown at the Würzburg Residence (Nov. 29th, 2020) and the cultivation of several hops varieties in Berlin to test different sound qualities. Updates in loose sequence here on this site.

Franz John engages in new and old media, which he uses to investigate the boundaries between hu­man and machinic possibilities of perception and rep­re­sen­ta­tion in relation to natural pheno­­me­na. In his works he combines in­ten­sive research and scientific analysis with vivid and of­ten touch­able and usable installations in public space. Often he deals with site-specific art projects that resonate with the his­to­rical, geological or cli­mat­ic charac­ter­istics of a region.

During a one year scholar­ship in Friedrichs­hafen in 2019, Franz John continued working on his pro­ject Color as Resource. For this project, the artist produced pigment solar cells from plants that are typical for the region. He uses these so-called Graetzel Cells as energy sources for his sound and light instal­la­tions. For this purpose, he has, for the first time, pro­duced such pigment solar cells from hops, an old regional crop. In the mean­time, he has expanded his artistic-scientific sen­so­rium – not least inspired by the sudden silence during the first lockdown in the COVID-19 pandemic – by adding a sound component that lent his research ac­tiv­ity some­thing of a medi­ta­tive dimension. Since then he has been listening closely to the hops, one of the fastest growing plants besides bamboo (up to 30 cm per day in summer).
Text by Clemens Krümmel

The project “Listening to the hops grow …”  was made possible by a grant from NEUSTART
KULTUR, special funding program 2020/21 of the Stiftung Kunstfonds, Bonn, Germany.